OVAETTR // ART OF ORION SCHIADA
Today is the day of the rocket launch. Nova has been looking forward to this for years, as his two fathers have been working hard on the project with the rest of the Meadownook Collective for Space Travel, established before Nova was even born. The two said their goodbyes and good lucks a few hours ago, as they will be in space for a week of Felicinae time. The team is set to soar through the opening in the canopy of gigantic oaks covering their planet’s sky. From there, they plan to establish some studies on one of their three local moons.

Nova is a young lionfolk boy with a tuft of pink hair and a pink tail tip complimenting his grey-blue fur. His yellow and pink eyes dart around as he wanders through the groups of people, more animalfolk, much taller than him. Everyone is gathering atop a local hillside to see the launch. The Hawk’s Claw Hill is a popular outlook peering over the village and most importantly the launch site that sits North of the town itself. Bumping into a couple people, Nova manages to find his way to the front of the crowd. Peering down they could see the steam billowing up from the rocket as it prepared to launch. “Just in time!” Nova thought to himself.
​
It was time. Everyone covered their ears as the sounds of the rocket engine picked up, the winds flowing from the power building up; Three...two....one......LIFT OFF! The hodgepodge looking rocket burst forth propelled by fires scorching the hot spore sands that covered the planet beneath. Separating itself with the land below, everyone cheers in response including Nova clapping earnestly. The cub was so proud of his family. They nearly were making it out of the canopy, glittering with gold structures from another kind up there.

Then it happens. The noise. He remembers it too clearly, a snap and then a piercing burst of sound unleashing overpowering light for a brief second. The rocket is suddenly pouring out smoke from one side, it is not long before a cascade of continued shots followed. SNAP! BANG! BANG! Everyone screaming, some stunned by the sight of the attack, falling over. Nova’s eyes look up in pain, trying to find the source of the onslaught. Clinging to his cloak, a piece of one of his father’s, he cries out for them in fear. It is drowned out by the volume of the civilians starting their own stampede for safety. Before Nova gets carried away, he looks back once more in reaction to the sound of an explosion coming from the rocket. Stuck staring for a moment, he is jostled by people shoving past him. He begins to run as scorching air blows over the group, blowing him down the hillside and into the fields and sand towards the forest nearby. Running, running, running. Never stopping to look back at his parents’ fate, fading away into the green skies – he fled away into the green hills.

An hour later of wandering through the forest, Nova wonders if he should go back. Only to find that he isn’t quite sure where he’s going, he pursues even deeper into the unknown.... 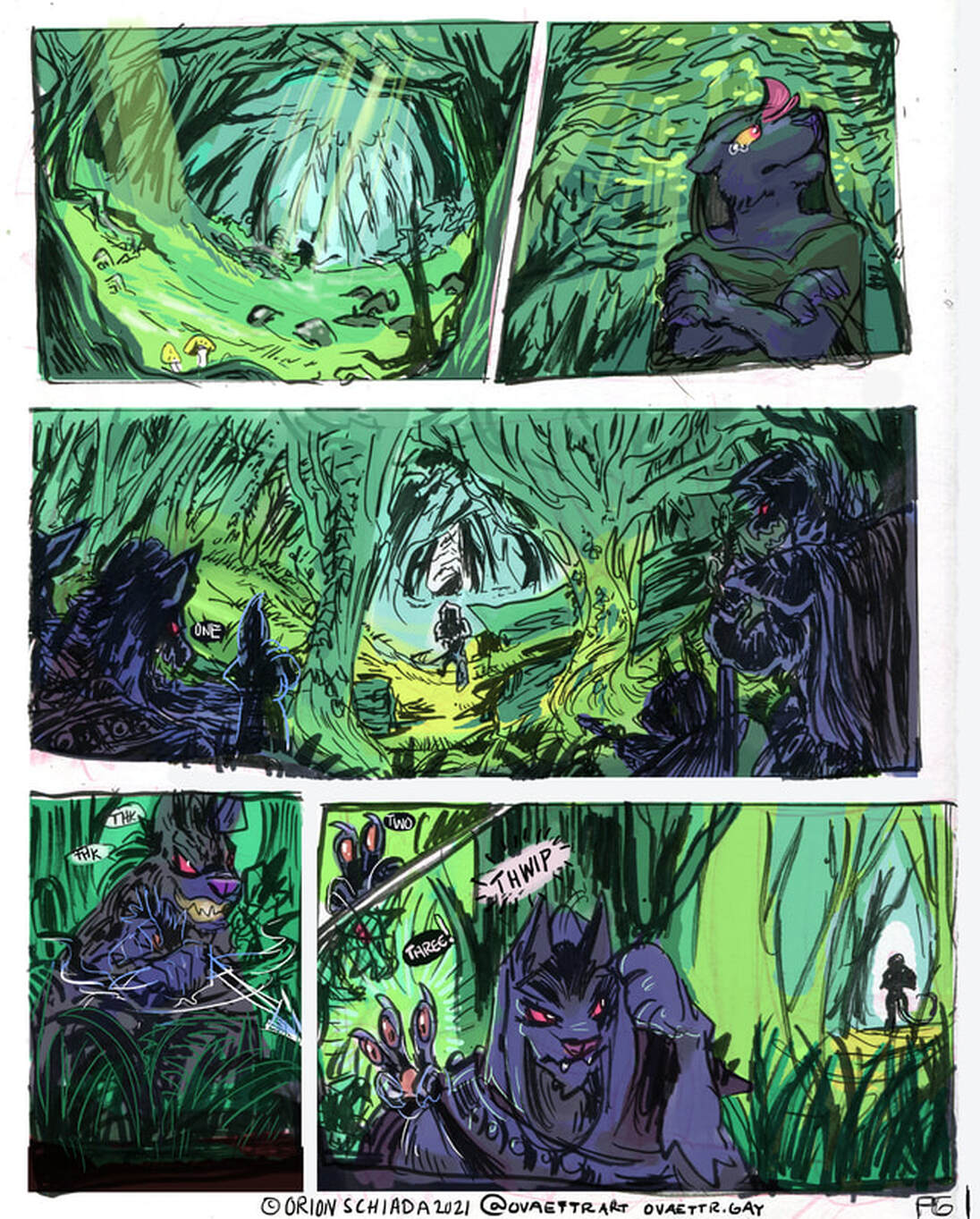 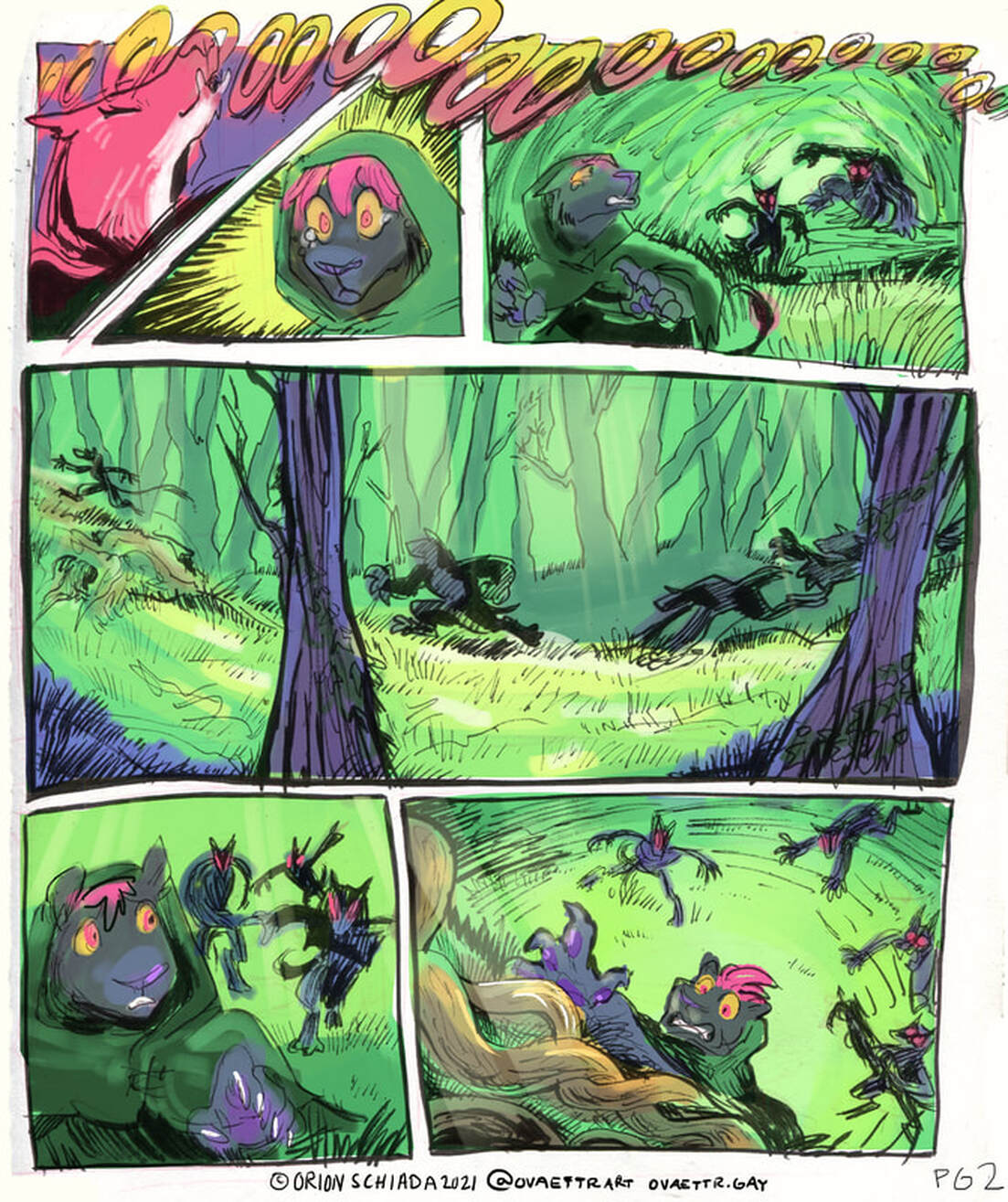 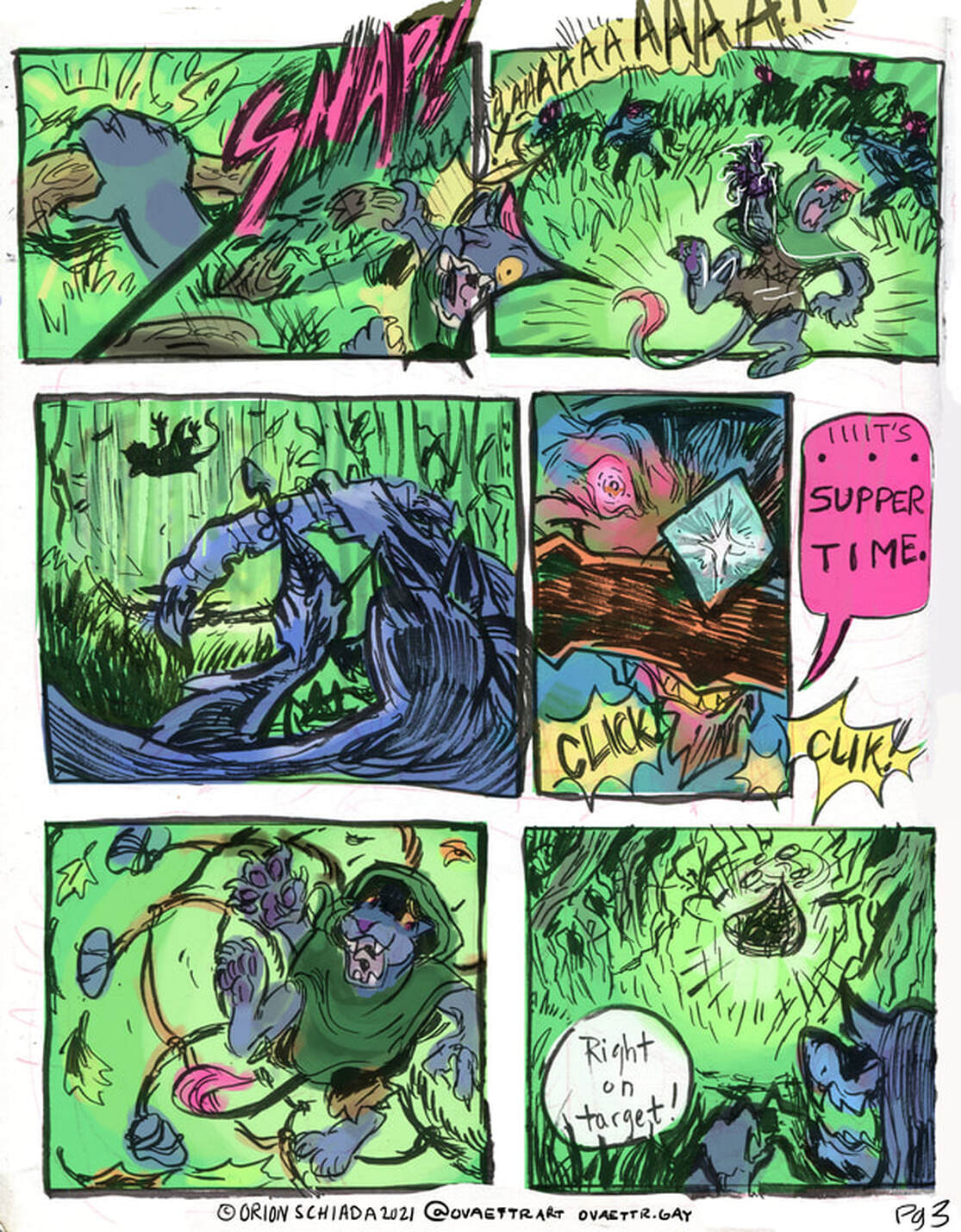 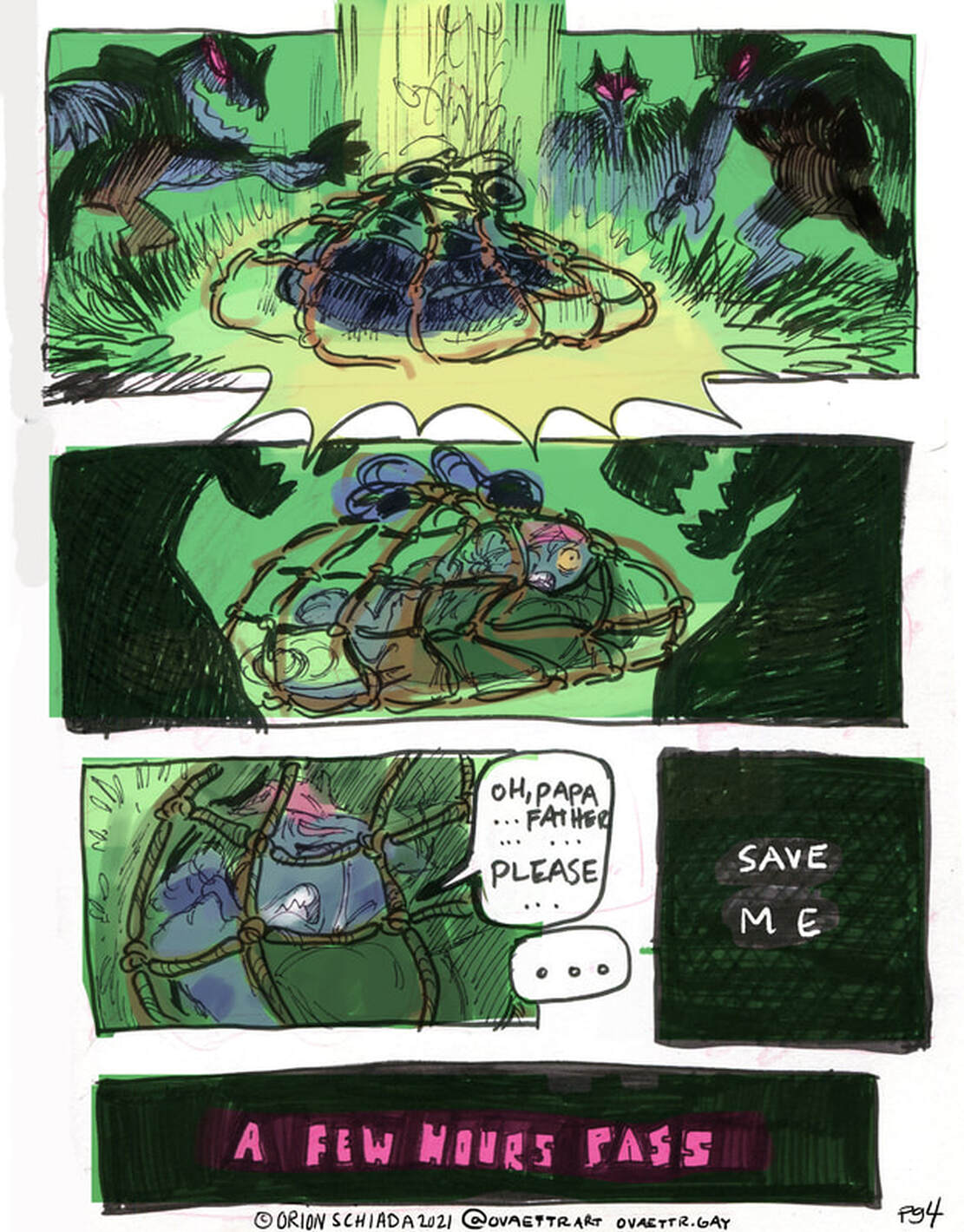 Synopsis of the following events of Nova's backstory:

- Survives being a prisoner of the jungle hunters group along with a handful of others
- Is saved by Argus, a werepanther who poses as a pantherfolk.
- Argus is a traveling mercenary who was tasked with a quest to save a local citizen's brother from this group.
- Nova was the only one who had no place to go when they returned to Meadownook, so Argus took him in
- Nova decided to stay with Argus
- Argus gives up the life of a traveling mercenary and went back to his roots, his love of music
- Nova had interest in music so was trained by Argus as his first bard
- Argus eventually 'adopted' 12 other bards and gave them a home in an abandoned chapel in Meadownook.
- 20 years have passed that Nova lives with The Circus of the Electric Chapel.
- Nova meets Sunstar, falls in love, and learns of the world  and stars above the giant world trees of Felicinae.
- Nova turns down Sunstar's offer to leave the planet with him and become a traveling bard, out of fear and cowardice. He regrets this decision for the rest of his life.
- 2 Years later, the Circus of the Electric Chapel is unable to get as many funds on their world and assign bards to travel with cargo ships as entertainment.
- Nova works for a cargo ship, and is abandoned at a trade depo on a meteorite in the galaxy of their home planet.
- Nova meets Captain Darkstarr, and begins his fateful journey with the Crew of the Yawning Nebula...